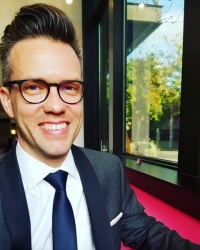 Ed is a ten-year veteran of the University of Washington with experience in both educational and operational aspects of academic programs. Most recently, Ed spent six years as the Director of Academic Services in Aeronautics & Astronautics where he supervised a team of academic advisors and managed daily operations for the department's undergraduate and graduate programs -- including student HR, supporting part-time instructors, program budgets, and scholarships. Before coming to Seattle, he completed his master's degree at the University of Wisconsin where he studied the history and philosophy of educational policy. A California native, Ed earned his undergraduate degree from UC Berkeley where he also worked for several years as a policy analyst for the faculty Academic Senate.

Ed lives in Issaquah with his awesome wife, soccer-player son, and rescue dog. He likes food and cooking, comic books and sci-fi, music, black coffee, and good conversation. He recently received his 200-hour Yoga Teacher certification and -- if he could just avoid training injuries for, like, a week! -- enjoys long distance trail running.