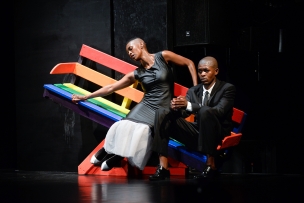 “Without acknowledgement, there can be no apology. Without apology, there can be no redress,” Cole writes in the Prologue to Performance and the Afterlives of Injustice. Swimming in the deceit of her California university where the genocide of native Americans is culpable for ten thousand unrepatriated bones buried in boxes under a campus museum, she draws comparisons across histories of settler colonialism to frame her research of South African contemporary artists. Telling a story of “awareness and heedlessness,” Cole contextualizes the long-denied atrocities of apartheid against her home institution’s hypocrisies, attending in both cases to “bodies that became objects, and humans who did not count as humans.” Chapters champion the dance, dance theater, performance art and “live art” works of contemporary South African artists Brett Bailey, Gregory Maqoma, Mamela Nyamza, Robyn Orlin, Jay Pather, and Sello Pesa, plus artistic collaborations with choreographer Faustin Linyekula from Democratic Republic of Congo, made possible by the otherwise failed or yet unfulfilled 1994 transition to new democracy. Cole posits that transnational artistic connections are a decolonizing corrective to sustained apartheid injustices and their “afterlives” that continue to isolate black South Africans from the rest of the continent and the world. Stark daily realities of unreliable delivery of water, electricity, and basic sanitation exacerbate mass unemployment, escalating university fees, and pervasive violence for South African people of color. In this, Cole invests major hope in artists who “have the capacity to disorder the toxic real and wedge open spaces where new fictions can take root, gestate, and become sentient, living, breathing realities in the now.” Moving from her former disciplinary home in Theater Studies to this book’s turn to Dance Studies, Cole argues that “dance accommodates more shades of gray than antiapartheid protest theater” through modalities focused on the body, on kinesthetic memories, on upending narrative and genre expectations, and refusal of coherence. That dance does so through satire, parody, and “and even blasphemy as means of ignition” is a powerful reminder of the bravery with which performers conjure, anticipate, and dream future worlds.

Learn more about The de la Torre Bueno Prize and the DSA awards.