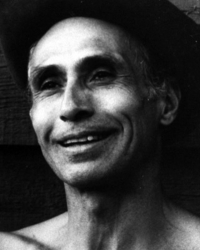 I view myself as a disciple and follower of Isadora Duncan, and the American impetus as exemplified by Doris Humphrey and Martha Graham, and by their vision of the dance as an art capable of the sublimity of tragedy and the Dionysian ecstasies. - José Limón (The Modern Dance, Seven Statements of Belief, Selma-Jean Cohen)
Born Culiacán, Mexico, January 12, 1908. Died December 2, 1972.
Born in Mexico, José Arcadio Limón immigrated to California with his family where he studied to become an artist. After moving to New York in 1928 to continue his art studies, he enrolled in the dance school of Doris Humphrey and Charles Weidman, and for the next decade performed in most of their works while choreographing and dancing on Broadway. In 1946, with Doris Humphrey as his artistic director, Limón formed his own company headquartered at the Juilliard School. In 1965 Limón wrote, “I try to compose works that are involved with man’s basic tragedy and the grandeur of his spirit. I want to dig beneath empty formalisms, displays of technical virtuosity, and the slick surface; to probe the human entity for the powerful, often crude beauty of the gesture that speaks of man’s humanity. I reach for demons, saints, martyrs, apostates, fools, and other impassioned visions.” There is a Time epitomizes Limón’s humanism and spiritual depth as well as his choreographic prowess. Originally titled Variations on a Theme, this 1956 masterpiece alludes to a chapter of Ecclesiastes and is choreographically and musically a theme with variations. Meditations on Ecclesiastes earned composer Norman Dello Joio the Pulitzer Prize in 1957 having been commissioned for José Limón by the Juilliard Music Foundation and its Festival of American Music in April 1856 (Copyright 1959 by Carl Fischer, Inc.).