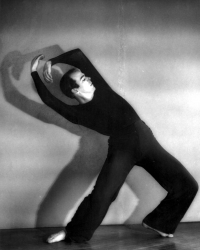 Art demands that we be part of life and merge with it. Art and life are as indivisible an entity as the artist and his audience. Charles Weidman

Charles Weidman (1901-1975) was born in Lincoln, Nebraska. At age nineteen he received a scholarship to the Denishawn School and soon became a leading Denishawn dancer, partnering Martha Graham and replacing Ted Shawn in important roles. In 1928, Weidman and Doris Humphrey established a company and a school devoted to exploring a new aesthetic. After Humphrey's retirement in 1945, Weidman continued to create dances, perform and teach, and also established a school and company of his own. He taught and performed with the company until his untimely death. Throughout his illustrious career his versatility as a choreographer led him to create dramatic, lyric, historic, abstract, and comic works, as well as dances for several Broadway shows, revues and operas. His large body of work reflects his serious humanistic concerns, his wit, and his clarity as a choreographer. As a very young boy, Weidman witnessed a lynching in Omaha, Nebraska, and was overwhelmed by the violence of the crowd. An excerpt from a larger work entitled Atavisims, Lynchtown many years later embodied his profound reaction to the mob.