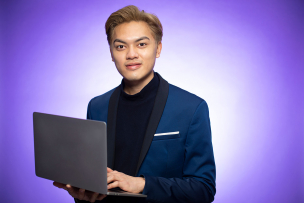 Congratulations to Louis Patsawee Maliyam for receiving the President's Medalist Award. The Awardees that included Louis and two others, Piper Coyner and Renee Zhang, were announced by the Undergraduate Academic Affairs at the end of January.

Louis is a computer science major and a dance minor. He recently performed in the UW Dance Presents Concert, and will be dancing in the Dance Majors Concert in March.