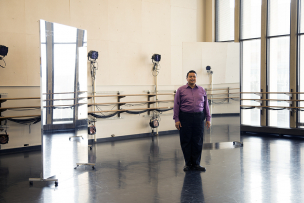 As a UW freshman, James Fesalbon opted for what he considered a practical course of study: pharmacy. When the stress of his coursework left him in need of an outlet, he signed up for a dance class. And then another, and another. By 1994, he had declared a dance major and performed
in several UW concerts.

After graduation, Fesalbon worked as a professional dancer. He later joined the staff of UW’s Meany Center for Performing Arts—home to some of his performances as a student. In 2008 he began making gifts toward the James Vamenta Fesalbon Endowed Dance Scholarship, with the UW Faculty Staff Retiree Campaign for Students providing matching funds. The scholarship was fully endowed in 2012. Fesalbon added to it in 2016, again through the Faculty Staff Retiree Campaign for Students.

Read more about James Fesalbon in the College of Arts & Sciences August 2018 Perspectives Newsletter and HERE.