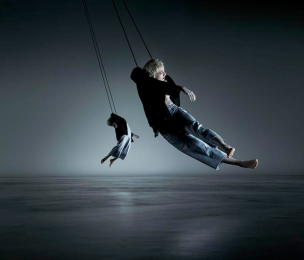 Article by Megan Stevenson in Seattle Dances: Rachael Lincoln, alongside San Diego-based collaborator Leslie Seiters, received a DanceCrush award for their piece an attic, an exit, presented at ACT Theatre. The staging of attic at ACT was in fact a revival of the piece for it’s 10 year anniversary, though Lincoln notes that the piece started 15 years ago, taking five years to develop. With so much time passed, Lincoln commented that Seiters was at first hesitant to revisit the piece, “so sure and so right that what we would make now would be so different.” Perhaps that is what attracted Lincoln herself, who said “There’s no way we would have made that piece now, but I loved having the opportunity to dive back in and see how even the smallest choices about performing something that’s set—how different that feels, now versus then.” I was glad to discuss the work with Lincoln, having had the good fortune of attending the premiere in 2006. After such a span of time it would be reasonable to assume the work might feel dated, but it escapes that pitfall completely, which Lincoln credits to the exhaustive craft of attic‘s world over those five years.

...Lincoln came to Seattle to teach at UW, and has the chance to see graduating students go on to forge their own path, citing her excitement for groups like AU Collective, a group of primarily UW graduates. “UW dancers are smart and have other interests outside of dance,” Lincoln says, describing the movers who embody the campus community she is a part of every day. Apart from teaching at UW, Lincoln is a member of the aerial dance group Bandaloop, a company she has been involved with since 1998. In October, Lincoln’s worlds collided when Meany Hall commissioned Strings, a work from Bandaloop. Drawn to the scale of the work, Bandaloop allows Lincoln the chance to expand her horizons (Watch SHIFT, a dance film Lincoln directed of Bandaloop in Yosemite). And just this past November, she was asked to direct Pink’s American Music Awards performance on the side of the JW Marriott building. Coming off the heels of what Lincoln describes as “the busiest fall I’ve ever had”, it seems presumptuous to ask what’s next. As it turns out, the answer is a lot. This weekend, December 15-16, Lincoln is performing with a group of improvisers called AVID at Meany Hall. In 2018, she presents work at the UW Faculty Dance Concert (January 24-28), in February she’s making commissioned work at another college, and with the rest of the year she plans to develop a new piece with collaborator Tamin Totzke. If that weren’t quite enough, she’ll continue to work with Bandaloop to develop Strings into an evening-length work, and she and Seiters have tentative dates to return to ACT Theatre with a new work.