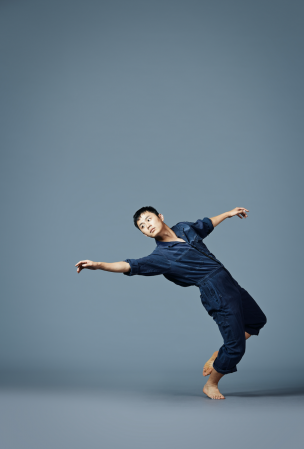 The Chamber Dance Company returns to the stage in October 2022. This year’s program, (see content advisory) performed in the intimate Meany Studio Theatre, celebrates a broad sweep of contemporary dance styles. Guests from Seattle’s professional dance community join the Chamber Dance Company to perform excerpts from Crystal Pite’s 10 Duets on a Theme of Rescue, and David Roussève’s haunting and tender work, Stardust. Completing the program are new works created by second year MFA students, Gary Champi, and Jenn Pray, that will be performed by company members with guests from the Department of Dance.

About the Program & Choreographers:

Gary Champi is a dance artist originally from San Diego, CA. He performs between New York and Seattle, drawing on experience with a variety of choreographers, touring nationally and abroad in theater spaces, museum installations, and site-specific work. As an educator, he teaches commercial dance and contemporary modern at the University of Washington, and has taught master classes and workshops for various institutions throughout the country. As a choreographer, Champi has presented work at La MaMa Experimental Theatre Club (NY), Base Experimental Arts+Space (WA), On the Boards (WA), and Seattle Theater Group. He currently has projects with Dance Place (DC) and Men in Dance (WA). He is authorized to teach Cunningham Technique® by the Merce Cunningham Trust (MCT) and also has experience restaging dance choreography. Gary worked in many capacities for MCT from 2011–2020, holds a degree in Cognitive Science from Stanford University, and is an MFA candidate at UW.

Chamber Dance Company will be performing three of these ten stunning duets that employ breathtaking partnering, timing and trust. Pite writes, “I am fascinated by the shared narratives that live in our bodies–– the familiar, repetitive storylines that move across cultures and generations, and the body's role in providing the illustrative shape of those moments. I'm curious about the way in which the body can convey profound meaning through the simplest of gestures, and how distortion, iteration and analysis of familiar human action provide an opportunity to recognize and re-frame ourselves in each other.”

In a choreographic career spanning three decades, Crystal Pite has created more than 50 works for dance companies in Canada and around the world. She is the founding artistic director of the Vancouver-based company Kidd Pivot, world-renowned for radical hybrids of dance and theater that are assembled with a keen sense of wit and invention. Pite is known for works that courageously address such challenging and complex themes as trauma, addiction, conflict, consciousness and mortality; her bold and original vision has earned her international acclaim and inspired an entire generation of dance artists. Pite began her dance career as a company member of Ballet British Columbia, then William Forsythe’s Ballett Frankfurt. She made her choreographic debut in 1990 at Ballet BC, and since then has created works for such prominent companies as The Royal Ballet, The Paris Opera Ballet, Nederlands Dans Theater I, Cullberg Ballet, Ballett Frankfurt, The National Ballet of Canada, Ballets Jazz Montréal (resident choreographer 2001–04), and Cedar Lake Contemporary Ballet. She has also collaborated with Electric Company Theatre and Robert Lepage, and is currently Associate Choreographer of Nederlands Dans Theater I, Associate Dance Artist of Canada’s National Arts Centre, and Associate Artist of Sadler’s Wells in London. Formed in 2002, Kidd Pivot tours internationally with critically acclaimed works such as Betroffenheit and Revisor (both co-created with playwright Jonathon Young), The Tempest Replica, Dark Matters, Lost Action, and The You Show. Pite is a Member of the Order of Canada. Her other awards and honors include the Benois de la Danse, Canada Council Jacqueline Lemieux Prize, Grand Prix de la danse de Montréal, two UK Critics’ Circle Dance Awards, four Laurence Olivier Awards, the 2022 Governor General’s Performing Arts Award, and an honorary doctorate from Simon Fraser University.

A new dance theater solo, Wake is a lullaby for a future earth void of birdsong. Performed by Noelle Price, the piece weaves language and movement into an offering for a quickly warming planet.

Jenn Pray is a dance artist whose career includes choreography, community engaged performance, and international touring of solo and ensemble work. Originally from central Iowa, Pray holds a B.A. with a double major in dance and international studies from the University of Iowa. Based in Minneapolis for nine years, from 2017–2021 she toured nationally as a company artist with Stuart Pimsler Dance & Theater. Additional performance credits include Threads Dance Project, STRONGmovement, Live Action Set, Ballet Minnesota and works by Camille A. Brown, Shapiro & Smith, Joe Goode, Martha Clarke, José Limón, Leyya Tawil and James Sewell. Pray’s choreography is a blend of dynamic movement, theater and social commentary. Her performance works have been presented by Tanzwerkstatt Europa in Munich, the Henny Jurriëns Stichting in Amsterdam and the Southern Theater in Minneapolis. Commissions include Threads Dance Project, Iowa Dance Theatre, the Minnesota Museum of American Art, and the Phipps Dance Company. A passionate educator, Pray has taught yoga and dance for over twelve years.

Choreographed, written, and directed by Roussève, Stardust explores the evolving nature of intimacy in our technology-driven, furiously-paced world. Redefining the coming of age story for the electronic age, this work, choreographically adapted for the Chamber Dance Company, follows an African American gay urban teenager who––never seen onstage––is present only by the emotion laden tweets and text messages he sends. While not autobiographical, like some of Roussève’s work, it is intensely personal.

Please be advised
Stardust contains projected text that includes racial and homophobic slurs and references to physical violence and explicit sexuality. An intermission precedes this work.

David Roussève, is a choreographer/writer/director/performer, magna cum laude graduate of Princeton University and a Guggenheim Fellow. His dance/theater company REALITY has performed throughout the UK, Europe, South America, and the U.S. including four commissions for the Brooklyn Academy of Music’s Next Wave Festival. Among others his commissions include Houston Ballet, Ballet Hispanico, Cleo Parker Robinson, Dancing Wheels, Atlanta Ballet, and Ilkhom Theater Co. of Tashkent, Uzbekistan. David has created three short films, the most recent screening at festivals at 56 festivals in 11 countries and receiving 10 awards including four for “Best Film.” Other awards include a “Bessie,” Creative Capital Fellowship, three Horton Awards, CalArts/Alpert Award in Dance, and seven consecutive NEA fellowships. David was published in collections by Bantam Press and Rutledge Press, was twice a Fellow in the Sundance Institute’s Screenwriter Lab, and just completed “Stardust,” a feature screenplay based on his dance/theater work. He plans to create the film with long-time collaborator, videographer and editor Cari Ann Shim Sham. At UCLA Roussève is Distinguished Professor of Choreography in the department of World Arts and Cultures/Dance. For the UCLA School of the Arts and Architecture, he has served as Associate Dean (2014–15), Acting Dean (2015), and Interim Dean (2015–17).

The Central Plaza Garage (CPG) just below Meany Hall has disability parking on all levels. Enter the garage from 15th Avenue NE at NE 41st Street. Central Plaza Garage clearance is 6’10”. There are entrances to Meany Hall’s Katharyn Alvord Gerlich Theater on levels C2-C5 and access to the Studio Theatre only on level C1 (enter parking code 12311 for disability parking on C1).

The Central Plaza Garage now uses PayByPhone. We recommend downloading the app before arriving, as reception is poor in the garage.

Entrance to the Studio Theatre

The lobby area has a level approach, a 35” doorway and an automatic door with paddle controls.The only entrance to Meany Studio that does not require stairs is through the Central Parking Garage, Level C1.

Safety and attendance guidelines for the 2022–23 season for all ArtsUW and Meany Center Visiting Artist events will be updated on this webpage in September 2022.

Events such as this are made possible with your generosity. Gifts to the UW Department of Dance support a wide range of needs that fill the gap not covered by state funding. From basic necessities to fulfilling dreams, all private funds support educational activities for students and faculty.

With your help, UW Dance is able to bring in guest artists, send students to conferences, contribute to scholarship funds and support our internationally recognized faculty in continuing to create their innovative work.