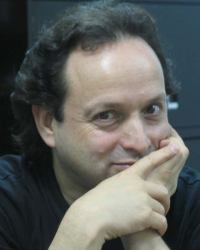 [What blocks dancers from fulfilling their potential]? Thoughts and feelings like not being good enough, lazy, weak, ugly, or unsuitable for the field. These attitudes bring you to a wall because of the connection between negativity in the mind and tension in the body. Without an understanding of this connection, any attempt to help a dancer attain better placement and efficiency of movement proves to be very difficult. Tension is an unnecessary power in the body that contorts it, therefore alignment is improved by letting tension go. A change requires a release not just of the musculature around the skeleton, but also a change in perceptions and attitude created in the mind. Dance Magazine 2006

Born Israel, 1952.
Zvi Gotheiner began his artistic career as a gifted violinist with the Young Kibbutzim Orchestra, where he attained the rank of soloist and concertmaster at age fifteen. He began dancing at seventeen, and soon after formed his first performance group. He first came to New York in 1978 on a dance scholarship from the American-Israeli Cultural Foundation, and went on to dance with the Joyce Trisler Dance Company, Feld Ballets/NY, and the Bat-Sheva Dance Company. After directing Tamar Ramle and the Jerusalem Tamar Dance Company in Israel, and the Israeli Chamber Dance Company in New York, he founded Zvi Gotheiner & Dancers in 1989. Zvi is a recipient of a New York Foundation for the Arts choreography fellowship and The National Arts Club Weiselberg Award, and has received commissions from Zurich Tanz Theater, Utah’s Repertory Dance Theater, Colloquium Contemporary Dance Exchange, the American Dance Festival, and twice by The Joyce Theater’s Altogether Different series. Zvi Gotheiner & Dancers, a ten-member dance company founded in 1989, performs works that mix modern, folk and traditional elements with lush, full-bodied movement. Concentrating on creating work that is musical, structured and humane, Gotheiner uses dance as a language to communicate his vision of human experience, particularly in exploring the relationship between individuals, and individuals and their environments.