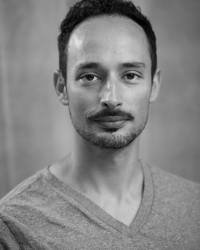 Yebel Gallegos is a dance artist from El Paso, Texas. He earned his BFA in dance, both from the University of Texas at Austin and from the Mazatlán Professional School of Dance, directed by Delfos Dance Company. Yebel played an important role in the founding of Cressida Danza Contemporánea in Yucatán, MX. During his time in Cressida Danza he served as dancer, company teacher, rehearsal director, and academic coordinator for the Yucatán Conservatory of Dance. Yebel recently concluded a six-year tenure working full time with Ririe-Woodbury Dance Company, based in Salt Lake City, Utah. While in Utah, he also involved himself in projects with local artists, as well as teaching various population groups in the community. He has performed work from artists such as; Twyla Tharp, Doug Varone, Ann Carlson, Netta Yerushalmy, Claudia LaVista, Joanna Kotze, Michael Foley, among others. Yebel has had the fortune to travel internationally as a performer and educator to countries such as; South Korea, Mongolia, France, Austria, and Chile.