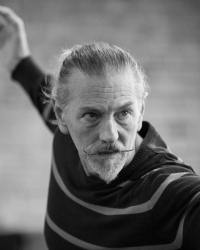 The collaboration between a dancer and a choreographer, at its best, is a union unlike any other, it is spiritual, philosophical, emotional, transcendental, and it is all transformative.
Wade Madsen

Born April 23, 1955, Albuquerque, NM.
Wade Madsen is a professor of dance at Cornish College of the Arts, where he has been a member of the faculty since 1985. He has also been offering regular dance classes in the greater Seattle community since the late ‘70s, and is a highly regarded and popular teacher. Additionally, Madsen has been producing and performing his own work with his company, Wade Madsen and Dancers, since they relocated to Seattle in 1977. A former member of the Bill Evans Dance Company and Tandy Beal & Company, he has received choreographic grants and fellowships from the National Endowment for the Arts, Washington State, King County, and Seattle Arts Commissions, Artist’s Trust, and Allied Arts. Madsen’s work has been produced in Seattle by the Allegro! Dance Festival, Seattle Dance Project, On the Boards, Bumbershoot, Rockhopper Dance, d-9 dance collective, Spectrum, Seattle Opera and ACT Theater. He has also performed with various Seattle dance groups including Spectrum Dance Theater, DanceWorks Northwest, Dayna Hanson, Amy O’Neal, Amy Legendre, Co-Motion Dance as well as two seasons with the Chamber Dance Company.