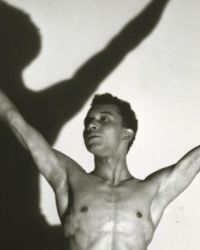 From an early age, Talley Beatty was aware that every aspect of African-American life was dominated by the constraints imposed by entrenched racial practices that had long been a part of America’s social and political infrastructure. - John Perpener

Talley Beatty studied with Martha Graham and Katherine Dunham and became a principal dancer with the Katherine Dunham Company at age sixteen. After touring with the Dunham Company for five years and appearing in films such as A Study in Choreography for Camera and Broadway shows such as Cabin in the Sky, Pins and Needles, and Blue Holiday, Mr. Beatty formed his own company and toured throughout Europe, the U.S. and Canada. For his work on Broadway, Beatty was nominated for a 1977 Tony Award as Best Choreographer for Your Arm's Too Short to Box with God. He is considered one of the greatest African American choreographers and his work focuses on the social issues, experiences, and everyday life of African Americans. Mourner’s Bench is an excerpt from Mr. Beatty’s first ballet, Southern Landscapes, which takes a dramatic look at the end of the reconstruction period marked by the end, through destruction, of the thousands of cooperative farms that had been created after the Civil War.