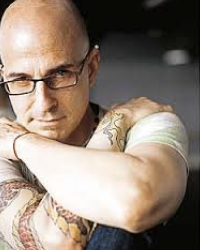 Sex is in the middle of everything, and it’s gorgeous.
Stephen Petronio

Born Newark, New Jersey, March 20, 1956.
Stephen Petronio was the first male dancer in the Trisha Brown Company with whom he danced from 1979-1986. He founded his own company, Stephen Petronio Company in 1984 and has received international acclaim for the development of his unique movement language and groundbreaking choreography. He has said that his dances originate as ideas, and he attempts to communicate the effect his ideas have on the body rather than the ideas themselves. Petronio’s only frequent musical collaborator is David Linton, from whom he has commissioned numerous assaultive electronic/percussion scores. Despite his preference for a heavy, driving beat, Petronio’s choreography is inherently non-metrical (his dancers never count); he uses musical pulse as a source of energy––not for rhythmic organization. Choreographically he always treats male and female bodies as functional equals. For Petronio, sexuality is an unalienable essence that permeates the body at a cellular level––a source of dignity, spiritual nourishment and self-knowledge. Petronio has received numerous awards including a Foundation for Contemporary Performance Arts Award (1999), a John Simon Guggenheim Fellowship (1987), a New York Foundation for the Arts award, the first American Choreographer Award (1987), and a New York Dance and Performing Award (Bessie) in 1986. He has been commissioned to create new works for companies including William Forsythe’s Frankfurt Ballet (1987), the Tulsa Opera (1990), the Deutsche Opera Berlin (1992), the Lyon Opera Ballet (1994), the Maggio Danza Florence (1996), and the Ricochet Dance Company of London (1998). Lareigne was choreographed for Marie Geronimo.