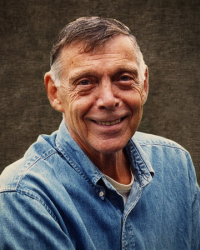 . . . for me, each new dance is like an adventure, and I’m trying to do something that I never tried before, and find movement that we [his company] haven’t done before. -Ballet Magazine 2002

Born Englewood, Pennsylvania, July 29, 1930.
Paul Taylor was once considered modern dance’s enfant terrible. In the 1950s, Mr. Taylor was creating choreography that rejected the conventions of mainstream ballet and modern dance. For example, in 1952 he presented Duet, a staged interpretation of John Cage’s score, 4’33”, consisting of four minutes and thirty-three seconds of silence and stillness. The dance received a review in The Dance Observer consisting of a blank column, identifying only the date and place of the performance. In an interview for City Arts, Taylor mentions Robert Rauschenberg, costume designer for 3 Epitaphs.

He did the costumes and he covered everyone in black. They’re all encased in black––black gloves, black hoods. You don’t see any skin whatsoever. The hands have round mirrors in the palms and there are round mirrors around the head, which reflect the light all over the back of the stage. They’re really wonderful costumes. But I remember, at that time, I was dancing in Martha Graham’s company, and she’d very nicely come and see my work. After we presented this 3 Epitaphs dance, she got me aside and she says, “Naughty boy. We don’t cover up their faces.” Well, of course, I wanted to do everything in my work to get away from her work. I did not want to be another little Martha Graham, as much as I admired her . . . So I was always trying to find ways, frankly, to annoy her.