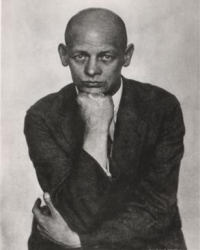 If today’s artists love the machine, technology, and organization, if they aspire to precision and reject anything vague and dreamy, this implies an instinctive repudiation of chaos and a longing to find the form appropriate to our times.

Born Stuttgart, September 4, 1888. Died April 13, 1943.
Oskar Schlemmer studied at the Kunstgewerbeschule as well as the Akademie der Künste in Stuttgart, where he became Adolf Hölzel’s master pupil in 1912. He was invited to Weimarin in 1920 by Walter Gropius to run the sculpture department and the stage workshop at the Bauhaus. The Bauhaus, an experimental school for the arts and design, was founded by Gropius in 1919, the same year that the Weimar Republic was established. Uniting the arts, crafts and technology in a gesamtkunstwerk (total work) of design, Gropius envisioned an architecture that would fuse the newfound technology of mass production with beauty and functionality. Schlemmer became internationally known with the premiere of his Triadisches Ballett in Stuttgart in 1922. His involvement in the Bauhaus and his preoccupation with the theatre are important factors in his work, which deals mainly with the problem of the figure in space. Influenced by Cubism, he often integrated figures into geometric structures. A similar proclivity for abstraction is reflected in Schlemmer’s steel and wire sculptures. After Gropius’s resignation in 1929 Schlemmer also left the Bauhaus and accepted a post at the Akademie in Breslau. He was given a professorship at the Vereinigte Staatsschulen in Berlin in 1932, but the National Socialists forced him to resign again in 1933. Oskar Schlemmer was one of the most versatile artists of the 20th century. His occupation with murals, sculpture, theatre, drawing, dance and painting illustrates his drive to create a gesamtkunstwerk. Schlemmer presented The Bauhaus Dances at the Dessau Bauhaus as a series of “lecture dances” on the figure in architectonic space.