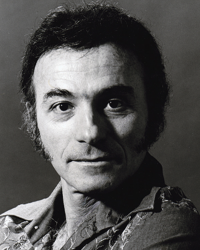 Born Brooklyn, New York, 1926. Died New York City, New York, February 1, 2016.
Murray Louis, a student of Alwin Nikolais, can be considered a third-generation disciple of Mary Wigman. Beginning in 1951, Louis was a principal dancer in Nikolais’s company. While he continued to maintain a close association with Nikolais throughout his life, Louis began to choreograph independently and later formed his own company. As a dancer, Louis was known for his mercurial virtuosity and his choreography reflects this proclivity. His work is witty, physically demanding, idiosyncratic and energetic. Louis seeks to evoke the senses and to create images that provide the viewer with a path connecting his material, physical world to the spiritual realm. He has created over one hundred works, toured five continents, and performed in every state in the U.S. A variety of composers have created music for him and he also has choreographed to the music of Bach, Brahms, Schubert, Stravinsky, and Tchaikovsky, among others. Louis has created dances for the Royal Danish Ballet, The José Limón Company, The Hamburg Opera Ballet, The Scottish Ballet, The Berlin Opera Ballet, The Cleveland Ballet, and for smaller companies in the U.S. and Canada. Louis also is considered one of the finest dance teachers, offering his students a rare insight into the theory and practice of the art. He also has written a collection of essays, Inside Dance, which was published by St. Martin’s Press, and a film series, Dance as an Art Form, which has become a standard introductory series for art education programs in the U.S.