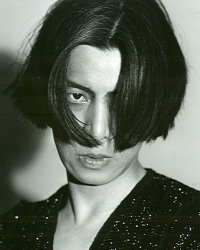 Everyone has his own feeling and his own expression; dance as you feel and as you want––that is a better dance for you than any other kind. I will not teach you as others do. I will stand by your side as assistant and advisor and help you to make your own dance. Michio Ito

Born 13 April 1892, Tokyo, Japan. Died 6 November 1961, Tokyo, Japan.
Michio Ito was born to Kimiye Iijima and Tamekicki Ito, an architect educated at the University of Washington. As a child he studied piano, and later voice and Japanese classical drama and dance. In 1911 he moved to Paris where he studied singing and saw both Vaslav Nijinsky and Isadora Duncan perform. Inspired by Duncan’s style and disillusioned by European Opera, Ito entered the Jaques-Dalcrose Institute at Hellerau, Germany in 1912.

At the outbreak of World War I, Ito fled to London where he was taken up by an elite circle of artists and began his career as a dancer. In 1916 he moved to New York where he spent the next twelve years continuing to develop his own dance technique. Among his students were Pauline Koner, Ruth St. Denis, Clare Booth Luce and Lester Horton. He also was director, scenic designer and/or choreographer for numerous theater productions.

In 1929 Ito moved to Los Angeles where he choreographed large symphonic works with hundreds of dancers in the Pasadena Rose Bowl and Hollywood Bowl. As a dance or scenic director, he worked on a number of motion pictures including No, No, Nanette and Madame Butterfly. In 1942 Ito was deported as an enemy alien and resided in Tokyo until his death.