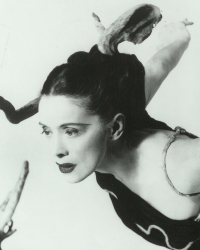 Martha Graham made a deep and lasting impact on American art and culture. She made an important contribution to defining contemporary dance as a uniquely American art form. Crossing artistic boundaries, she collaborated with and commissioned work from the leading visual artists, musicians, and designers of her day, including sculptor Isamu Noguchi and composers Aaron Copland, Samuel Barber, and Gian Carlo Menotti. Graham’s groundbreaking style grew from her experimentation with the elemental movements of contraction and release. By focusing on the basic activities of the human form, she enlivened the body with raw, electric emotion. The sharp, angular, and direct movements of her technique were a dramatic departure from the predominant style of the time. During her long and illustrious career, Graham created 181 dance compositions. During the Bicentennial she was granted the United States’ highest civilian honor, The Medal of Freedom. In 1998, TIME Magazine named her the “Dancer of the Century.” The first dancer to perform at the White House and to act as a cultural ambassador abroad, she captured the spirit of a nation. "No artist is ahead of his time,” she said. “He is his time. It is just that the others are behind the time.”