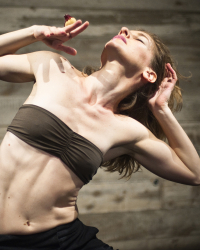 Weare’s dancers generate a heat that seems to come from the glide and pressure and quick brush of skin against skin, and against the skein of air between moving bodies. - Deborah Jowitt, Arts Journal’s Dance Beat

Kate Weare received her BA from California Institute of the Arts and danced in Los Angeles, San Francisco, London, Belgrade and Montreal before settling in New York City. She founded the Kate Weare Company in 2005 and has steadily gained recognition for her uncompromising, articulate choreographic vision. Her dances deal with intimacy, power, identity, gender and the body’s brilliant capacity for truth telling. The company recently celebrated its 10th Anniversary with a season at Brooklyn Academy of Music (BAM) in 2015. Weare is a 2014 Guggenheim Fellow, 2011 Mellon Foundation Awardee, and 2009 Princess Grace Award-Winner for Choreography. She has been awarded choreographic residencies at Brooklyn Academy of Music (BAM), The Joyce Theater, Jacob’s Pillow Dance Festival, CalArts, Bates Dance Festival, and Dance New Amsterdam (DNA), and her work has been presented at major venues throughout the U.S. and abroad.