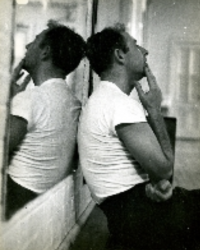 Every emotional expression should be done on a release, not a contraction. Do not substitute tension for intensity. Do not confuse the two. When tension begins to disappear, then intensity, a fullness of expression, can take place. Tension always squeezes away fullness and the ease that comes with it.
Joseph Gifford

Joseph Gifford began his performing career in New York City as a member of the Humphrey/Weidman company. Subsequently, he formed his own company, the Joseph Gifford Dance Theater, which performed annually in NYC and on tours throughout the U.S. During his years in NYC, he assisted Doris Humphrey in her teaching, appeared in several musicals on Broadway, and taught for many years at the New Dance Group Studio. In keeping with the NDG's fundamental rule that “ . . . one must not dance or choreograph in a vacuum but address everyday problems in a coherent style that would connect with a working-class audience . . ." Gifford created The Pursued after seeing Picasso's Guernica; the painting was a reaction to the Nazi German bombing of the Basque cultural center, Guernica during the Spanish Civil War. Doris Humphrey advised him on the choreography and Gifford first performed the work with his dancing partner at the time, Mary Anthony. In mid-career, he joined the faculty of the School of Theatre Arts, Boston University, to establish a curriculum in movement training for the actor. In 1985, Mr. Gifford joined the faculty of the American Symphony Orchestra League’s workshops for conductors working privately with prominent American conductors; he continues to give seminars and private classes for conductors and instrumentalists throughout the U.S. and in Europe.