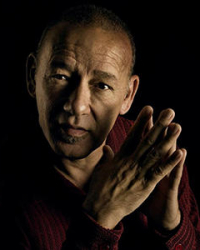 Goode's dance making is grounded in the acceptance of gravity as an inescapable force in life. Gravity represents regret, love, lust, hopelessness––any number of emotions we cannot deny in ourselves. David Wiegand, San Francisco Chronicle

Born 1951, Oklahoma City, OK. Joe Goode is widely known as an innovator in the field of dance for his willingness to collide movement with spoken word, song, and visual imagery. Joe Goode Performance Group, formed in 1986, tours regularly throughout the U.S., and has toured internationally to Canada, Europe, South America, Africa, and the Middle East. Goode was awarded the United States Artists Glover Fellowship in 2008, a John Simon Guggenheim Fellowship in 2007, and the New York Dance and Performance Award (Bessie) for the creation and choreography of his work Deeply There. In 2006 Goode directed the opera Transformations for the San Francisco Opera Center. Goode’s performance-installation works have been commissioned by the Fowler Museum of Natural History in Los Angeles, Krannert Art Museum, the Capp Street Project, the M.H. de Young Museum, and Yerba Buena Center for the Arts. Pennsylvania Ballet, Zenon Dance Company, AXIS Dance Company, and Dance Alloy Theater, among others, have commissioned his dance theater work, among others. He is on the faculty of the University of California, Berkeley in the department of Theater, Dance and Performance Studies. Commissioned by the College of Saint Benedict-Benedicta Arts Center in St. Joseph Minnesota, grace premiered on June 3, 2004 at Yerba Buena Center for the Arts in San Francisco. Goode created the work as part of a trilogy exploring the “extraordinary dimensions of ordinary people.”