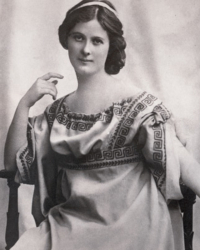 The dancer's body is simply the luminous manifestation of the soul. Isadora Duncan

Isadora Duncan was one of the great innovators in the history of dance. Her dance technique and choreography, the extraordinary events that marked her life, and her philosophy and writings on dance and life continue to fascinate dancers and historians. Duncan’s work was not filmed or notated during her lifetime. Primarily what we know of her technique and choreography today has been handed down directly from dancer to dancer.

Duncan asserted her right to create dance in her own image. She used music and movement to convey the nature of her innermost being. Although she was criticized for it at the time, Duncan dared to use music of master composers for her dances and her superb musicality was quickly recognized. Her early choreography such as Ballspiel, Petals and Water Study, often reflected the rhythms and harmony found in nature. She also was strongly influenced by Greek art, as seen in The Furies, The Three Graces and Classical Duet.

In 1905, Duncan made her first stage appearance in Russia that instigated a heated and lasting controversy between old school balletomanes and advocates of the reform of ballet. Drawn by the developments taking place in Russia after the 1917 Revolution, she returned in 1921 to establish a school there. During this period she choreographed The Mother and The Revolutionary.