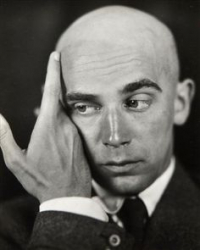 I saw that a man could, with dignity and towering majesty, dance. Not mince, prance, cavort, do ‘fancy dancing’ or ‘show-off’ steps. No. Dance as Michelangelo’s visions dance and as the music of Bach dances.

Born December 11, 1902, Liberec, Czech Republic.
Died April 25, 1968, Bern Switzerland.
Harald Kreutzberg played a major role in the development of ausdruckstanz, or expressionist modern dance in Germany. A student of Mary Wigman, Kreutzberg was a critical link in the aesthetic lineage that gave rise to Hanya Holm, Alwin Nikolais, and many current U.S. choreographers. In 1927 he appeared in plays directed by Max Reinhardt and in 1929 came with Reinhardt to New York City. Kreutzberg then toured the U.S., Canada, and Europe with the dancer Yvonne Georgi. While his impact on ausdruckstanz was sweeping Europe, in the U.S. Kreutzberg was considered by Erick Hawkins, José Limón and Ruth Page as a major force in the development of the male modern dancer at a time when women "pioneers" were more abundant. George Balanchine and Lincoln Kirstein invited him to share a program with the New York City Ballet in the late 40s. During the Nazi regime, Kreutzberg “. . . was one of the only well-known German dancers who maintained a good relationship with the Ministry of Propaganda . . . He knew what his role had to be in order to continue dancing.” (International Dictionary of Modern Dance, Raugust)