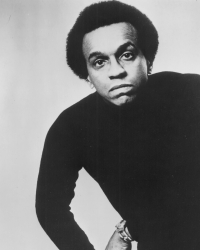 I love the challenges intrinsic in the change from one medium to another. The creative act . . . always involves the filtering of your ideas through someone else’s talent. Dance USA, 1994

Born July 6, 1930 in New York City.
Donald McKayle began his career with a scholarship at the New Dance Group school and has gone on to receive honors and awards in every aspect of his illustrious career. He has been named by the Dance Heritage Coalition “one of America’s Irreplaceable Dance Treasures: the first 100.” His choreographic masterworks, considered modern dance classics, Games, Rainbow Round My Shoulder, District Storyvillw, and Songs of the Disinherited are performed around the world. He has choreographed over nintey works for dance companies in the U.S., Canada, Israel, Eurpoe, and South America. He is Artistic Mentor for the Limon Dance Company. Five Tony nominations have honored his choreography for Broadway musical theater. He has received the Capezio Award, Samuel H Scripps/American Dance Festival Award, American Dance Guild Award, Living Legend Award from the National Black Arts Festival, Heritage Award from the California Dance Educators Association, Dance/USA Honors, an Irvine Fellowship in Dance, two Choreographer’s Fellowships from the National Endowment for the Arts and the 2004 Martha Hill Lifetime Achievement Award, amoung others. He has received an Honorary Doctorate Degree from Cornish College of the Arts and Juilliard. For his work in education, he has earned the Balasaraswati/Joy Ann Dewey Beinecke Endowed Chair for Distinguished Teaching, UCI’s Distinguished Faculty Lectureship Award for chair. Mr. McKayle has served on the faculties of numerous international fora nad many prestigious national institutions. His autobiography, Transcending Boundaries: My Dancing Life, was honored with the Society of Dance History Scholar’s De La Torre Bueno Special Citation. A television documentary on his life and work, Heartbeats of a Dance Maker, was aired on PBS.