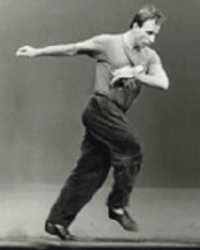 Jazz is such rich music. I don’t use it as atmosphere or background. The music is the subject matter . . . I learned more about the United States studying the history of jazz dance than I ever did from any history class I ever took. Dance Magazine article 1999

Drawing on a background in ballet and modern in addition to jazz, Buraczeski has helped redefine what was once considered a limited form––jazz dance. Describing himself as a perpetual student, he says, “I love to read, go to museums and performances, and meet people. You never know when you might meet someone or see or hear something that sets up a feeling of electricity. Then I explore and see if there’s something there. Jazz is such rich music. I don’t use it as atmosphere or background. The music is the subject matter.”1 He founded his company JAZZDANCE in New York in 1979 after a career on Broadway working in musicals such as Mame with Angela Lansbury and in The Act with Liza Minelli. Ten years later he merged JAZZDANCE with the Zenon Dance Company in Minneapolis/Saint Paul, where he served as artistic co-director until 1992. His movement has been described as weighted, angular, swinging, pulsing, rhythmically complex, coiled, curvy, and flowing. He has received numerous grants and fellowships for choreography, including the National Endowment for the Arts Choreography Fellowship, New York Foundation for the Arts Choreography Fellowship, and the Jerome Foundation. Buraczeski has had works commissioned by Harvard Summer Dance, Jacob’s Pillow Dance Festival, and the American Dance Festival.