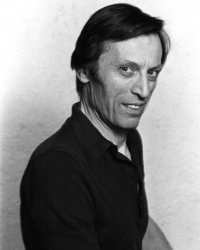 Born New York City, May 22, 1917. Died December 9, 2008, Tempe AZ.
Daniel Nagrin has achieved prominence in every area of dance, as a dancer, choreographer, teacher and writer. In a professional career beginning in 1940, he was a mayor dance soloist in Broadway musical comedies for fifteen years, during which time he was voted Best Male Dancer. He was associated with one of the founders of modern dance in America, Helen Tamiris, with whom he co-directed the Tamiris-Nagrin Dance Company. From 1957 to 1984 he toured his own choreography on the university circuit with solo programs that are now part of American dance heritage and performed today by leading dance soloists. Mr. Nagrin has been the recipient of numerous grants and awards from The National Endowment for the Arts, The New York State Council for the Arts, and Arizona State University where he was appointed full professor in 1982. In 1991, he became the first dancer to receive an Honorary Doctorate of Fine Arts from the University of New York. Retiring as Professor Emeritus the following year, he published his second book on dance, Dance and the Specific Image: Improvisation. His first book was How to Dance Forever and he is currently at work on two additional books. Remarkably Mr. Nagrin danced professionally from 1940 to 1984; he was sixty-seven at the time of his last solo concert. Nagrin is often called “The Lone Dancer” because his fame emanates from a career as a solo artist. Nagrin’s focus on creating the “Other” throughout his works correlates with the viewpoint of an anthropologist who searches to understand the meaning of the dance he is studying through understanding the “Other’s” culture.