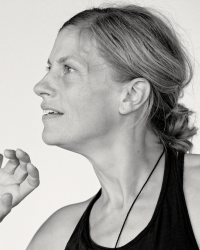 To be able to take risks and to have a kind of creative recklessness is what it takes to be an artist.- Crystal Pite, 2014

Born and raised in British Columbia, choreographer and performer Crystal Pite began her dance career as a company member of Ballet British Columbia and William Forsythe’s Ballett Frankfurt. Crystalʼs choreographic debut was in 1990, at Ballet British Columbia. Since then, she has created works for Nederlands Dans Theater I, Cullberg Ballet, Ballett Frankfurt, The National Ballet of Canada, Les Ballets Jazz de Montréal, Cedar Lake Contemporary Ballet, Alberta Ballet, Ballet Jorgen, and several independent dance artists. In 2002, she formed her own company, Kidd Pivot, in Vancouver, BC. She continues to create and perform in her own work. The company tours nationally and internationally, performing such highly demanded and critically acclaimed works as Dark Matters and Lost Action. Crystal is the recipient of several major awards, including the 2008 Governor General of Canadaʼs Performing Arts Award, the 2011 Jacobʼs Pillow Dance Award, a 2015 Olivier Award for Outstanding Achievement in Dance and the 2016 Critics Circle National Dance Award.