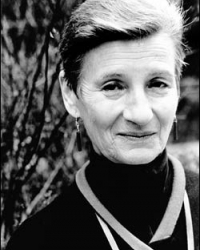 Dancing is not normal . . . only a strong, knowledgeable body can protect against damage.
Donna Perlmutter. Dance Magazine, January 1997

Born Los Angeles, California, January 13, 1916. Died Pasadena, California, July 16, 2004.
Born to Russian immigrants, Lewitzky spent her childhood in a utopian socialist colony in the Mojave Desert, and on a ranch in San Bernardino. She moved back to Los Angeles in her teens and studied ballet. In 1934, she joined Lester Horton’s company, became its lead dancer, and was instrumental in the development of the Horton Technique. There, she met Newell Taylor Reynolds; they married in 1940. In 1946 Lewitzky founded Dance Theater of Los Angeles with Horton. Dance Theater of Los Angeles was one of the few institutions in the United States to house both a dance school and theater under the same roof. She left the company in 1950 to pursue her own interests and an independent career. She choreographed the films Bagdad (1949) (with Lester Horton), Tripoli (1950), and Prehistoric Women (1950). She has received many awards including honorary doctorates from California Institute of Arts (1981), Occidental College (1984), Otis Parsons College (1989), and the Juilliard School (1993).“Great control of every motion and placement,” she says, “is a kind of self-care. It’s self-love in the best sense. I make a contract with the dancers (not literally, of course) to keep them alive and well and progressive––doing level best to see that they’re not injured.” One must bear in mind, she says, that “dancing is not normal, that only a strong, knowledgeable body can protect against damage.” – Bella Lewitzky, from an interview with Donna Perlmutter, Dance Magazine, January 1997