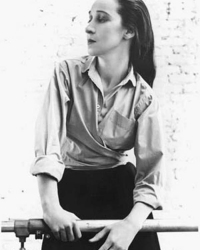 I felt a deep social sense about what I wanted to express, and . . . the things that affected me deeply personally [are] what I did, and commented on.
Anna Sokolow

Born Hartford, Connecticut, February 9, 1910. Died 2000.
Anna Sokolow, the daughter of Russian Jewish immigrants, grew up in New York’s Lower East Side. She studied with Louis Horst and Martha Graham at the Neighborhood Playhouse and danced with Graham’s company from 1930 to 1937. In 1934 she formed her own company and choreographed extensively throughout her life. Sokolow’s extraordinary career spanned over six decades, and had a profound effect on the course of modern dance in the United States, Mexico, Israel, and other countries. She was interested in integrating dance, drama and music. As a teacher of both dancers and actors, Sokolow insisted that students transcend their technical accomplishments to give, through movement, the deepest expression of what they had experienced in their lives be it love, hate, fear, anger or loneliness. Her primary focus as a teacher was not on technical skills, but rather on movement as a language––always demanding more passion, more commitment, greater clarity of intent. She sought a direct connection between emotion and physical expression––thus building her students’ and company members’ confidence to move in ways they thought were beyond their abilities. Sokolow was a pioneer in the creation of dances that explore the innermost feelings of men and women in reaction to the social and psychological pressure of contemporary life. This can be seen in Rooms, an uncompromising series of desperate urban portraits. Choreographed ten years after Rooms, Ballade, on the other hand, is a dance about love, hope and youthfulness––as different as it could possibly be from the dark earlier work.