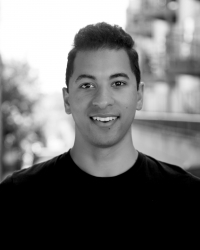 Alex Crozier, a native of Philadelphia, Pennsylvania, received his dance training from Wissahickon Dance Academy under the direction of Nancy Malmed. As a graduate of University of the Arts he received his BFA in Dance. Alex was a principle company member of Spectrum Dance Theater working with Donald Byrd. With Spectrum, he performed various lead roles including the Interlocketer in Donald Byrd's 'The Minstrel Show Revisited' and the Carnival Boy in the 5th Avenue Theatre's production of 'Carousel'. Hehas performed with Pennsylvania Ballet as a guest artist, the Houston Grand Opera, and with Liz King’sD.ID in Austria where he toured extensively throughout the country. Alex has had the opportunity to present work at the Austrian dance festival Ötanzt and Central District Forum's Showing Out. He has created work for Seattle Men’s Chorus and Spectrum Dance Theater. In 2017 Alex presented his full- length production MILLENNIALS which focused on the prevalence of cultural appropriation and pop culture within the Millennial generation. Alex is currently based in Seattle as an independent artist creating original dance and film work.